You were wild once don't let them
tame you.  Isadora Duncan

So glad it is the end of the week.
There was very little sleep here at Pumpkin Cottage
this week.  Miss Holly started the sickness.
She is fully recovered today.

Mama is ecstatic when everyone is healthy.

Jacob is the student of the month for the second
time this year.  We celebrate today.

After three tries, I kept passing out only to be wide awake at 1 a.m.,
I watched a whole episode of
the Bob Newhart Show,
A Pound of Flesh
Season 3 Episode 19.
Really funny with a nod to sibling rivalry.

Joe said:
Don't miss the comments from the old lady.
She was one of the cast of crazies. You can
see first 3 seasons on Hulu.  SUPERB
writing.   Bob was a big comedian and had many hit
albums.  He has an everyman quality trudging through
life. In his one man act he did a one sided phone conversation.
He inserted all the appropriate pauses and inflection as he responded
to other characters but it was all him.
Alone in the scene with his infallible comedic timing
and straight man expressions.


A lazy daisy weekend planned with some
gardening and home projects. Lots of rest.

Have I ever mentioned how much I love Dame Judi Dench?
I would really enjoy seeing her new movie
the Best Exotic Marigold Hotel.

Maybe some tasty Mexican food on Saturday.
If everyone's tummies settle down.

There has to be a nap or two and some embroidery quiet
time. On Sunday, the Patchwork Show in Santa Ana,
Jamestown Fleamarket in Tustin, and a visit to the
gardens at Country Roads in Orange. 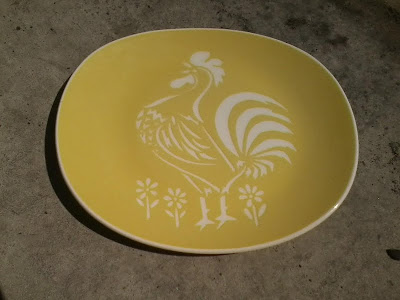 My brother, and Mr. Lee's favorite sibling,,yeah he really does say that,
knows my taste perfectly.  It is with anticipation that I await the many
treasures he gives me.  Not just lovelies like this rooster platter, but
words of encouragement, videos of creative people,  and the cane he
selected years before I was ready.