During our Discardia adventure, in the garage,
Mr. Lee found a wedding anniversary card
from just over 20 years ago.  It was from
a particularly difficult time, my nearly nine
year marriage was crumbling, and my then
husband had been out of work for nearly a year.
Up until he lost his job I had been a homemaker.
All those years ago, I was thrust away
from my two small boys and
into the workplace to make ends meet.

The card embraced three letters, my sister
always folders her letters like a hug.
The letters were from my sister, mother and brother.
Each letter acknowledged my grief and
encouraged faithfulness.
Their words powerful and
sentimental all these years later.

Part of the clearing out includes life
laundry. Clearing of emotional cobwebs,
old hurts, welcoming joy, embracing
where we have been, and how we
move on through our experiences.


Today, I mailed a little care package to my sister.
Enclosed was twenty year old currency
that was found enclosed in the anniversary card.

The card and it's precious
contents may have never have been
found buried in the clutter of the garage
without Discardia and tidying.

Everything happens in its perfect time.
Posted by Genie at 10:10 PM 1 comment:

There is nothing like staying at home for real comfort.

Jane Austin
Happy weekend dear readers.
Pumpkin Cottage is celebrating Spring Discardia.
This weekend the focus is on tackling the two-car garage
where only one-car can be squeezed in.
The principles of Discardia and ideas from Marie Kondo's
The Life Changing Magic of Tidying Up will be used to
direct the art of living with less clutter and more organization. 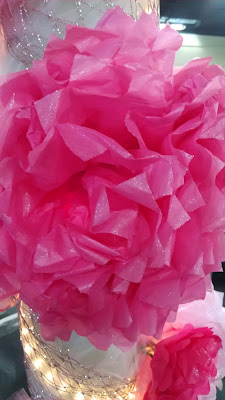 One side of the garage houses tools, of every category,
and the other side a mountain of clutter.
Clutter of the making variety, if you are a maker/crafter
you know exactly of what I speak.  There's a fire pit requiring assembly,
too many clear boxes with one item each, the odd book, and cooking
equipment for occasional use. 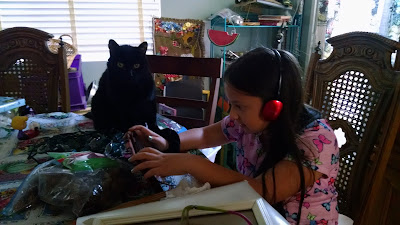 The dining area, you see here will also be included in the celebration,
It looks much better than it did here, but still has a ways to go.
With Easter coming its current state is unacceptable.

Our tasks will be made lighter by having three dedicated
containers near by: Keep, Toss or Donate.
Keep items will be stored vertically not in piles. Everything
sitting on end. Consider a drawer of clothing instead of
piling your folded jeans stand them vertically in the drawer.

On Monday, a visit to the donation center and  a dump run
will remove a majority of the unnecessary items.

Here's an idea for all those unused frame.  Hmmm. 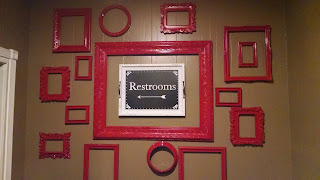