My word for 2015 was seed.  This word continues to
pop up, inspire and lead me into learning journeys.
It starts something like this: read,
today it was from this book,
Desire to Inspire Using Creative Passion
to Transform the World.


Unlike the light reading I enjoy for pleasure, there are
books I read for nugget safari.  Safari is best achieved
with electronic books where passages may be highlighted,
comments written, and searches for text or highlighted
passages are easily performed.  Sometimes it can take me
years of contemplation to recognize a nugget but once it is found
I can easily locate the passage and my related thoughts.
The nugget of information is only recognizable with openness
to the lessons, people or circumstances presented. 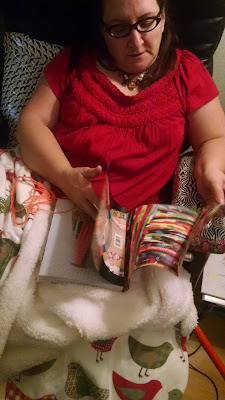 Here's my short list of books I use in this way:
The Bible
You're Made for a God-Sized Dream
This is the Story of a Happy Marriage
30 Lessons for Living: Tried and True Advice from the Wisest Americans
Life is a Verb
A Short Guide to a Happy Life

A single word or passages may spark a journey.
Today it was this sentence:


One small garden
spread seeds to a photographer from Guam,
a poet from Israel, a writer from Lithuania and
artists from all over the U.S.

From this passage I started an internet search for
Amy Krouse Rosenthal's movement The Beckoning of Lovely
then I found Amy's Tedx on the subject.  From there...
Sam Bern's Tedx on My Philosophy for a Happy Life.

Amy shared this in her Tedx:

What you seek, you will find.
What you summon, will find you.


This is true in my life.
It happens all the time but is best illustrated by my
thrift store safaris.
Most of the time, I hunt without expectation.
It's enough to simply be open to finding a
treasure.  On occasion, I do seek specific things
with excellent results.
Months ago I was seeking curtain rings as
the base for creating ornament wreaths.
Found a one gallon zipper bag full for $5.
Still using these lovelies to make
ornaments. 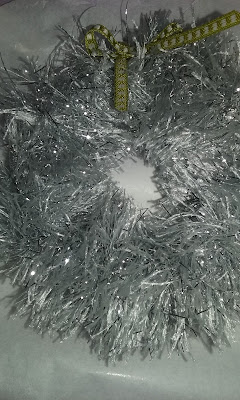 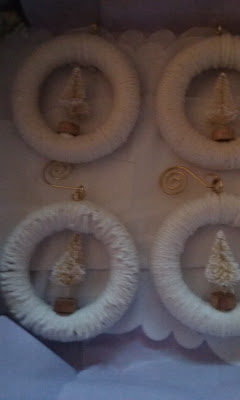 Sought a specifically shaped bird house.
Found the very next day for $3.
Work is progress: 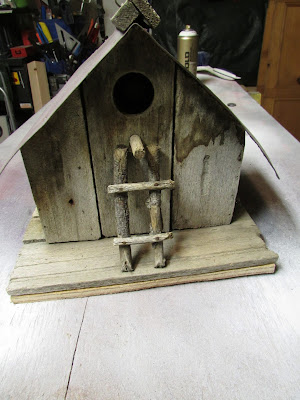 After Christmas, sought a blow up red
cardinal for 2016 Christmas garden display.
Found on sale the following day.

Mr. Lee says bring $1 Million Dollars or
bags of cash to us. That's a story for another day.


Greetings dear readers and apologies for

My time for recuperating is quickly ending.
My recollection of arriving here today consists
of the count down of days to surgery.

Surgery could not have come any sooner.
As the fear of the procedure was surrmounted by
the desire to have the horrific constant pain cease.
And cease it did...instantly.  Pain gone, nausea and
insomnia commenced. The retched nausea is the worst.

Its all finally behind me.  I can now concentrate,
read for more than a few minutes, pin happily
on Pinterest and write the occasional post.

The past weekend was inspiring.
Last Saturday, I visited the beauty parlor, first time
in nearly 90 days, where whatever you pay is cheaper
than therapy, and later walked (exercise with a
purpose) the Road to California quilt show.

It looks like pillows in rows but it is a quilt. 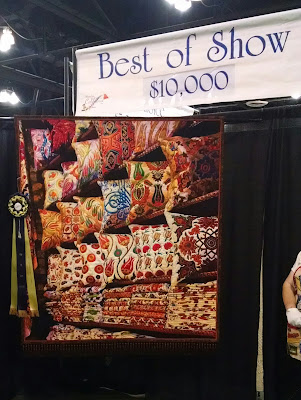 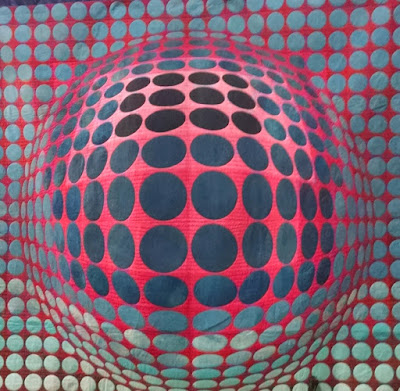 It's a optical illusion.  Such talented quilters. 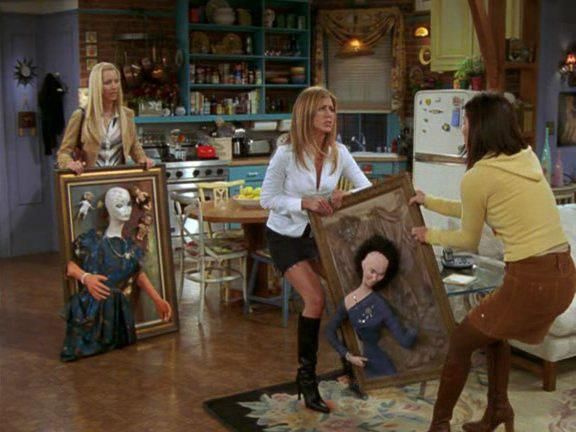 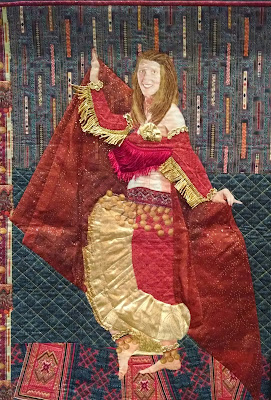 Three of my favorites: 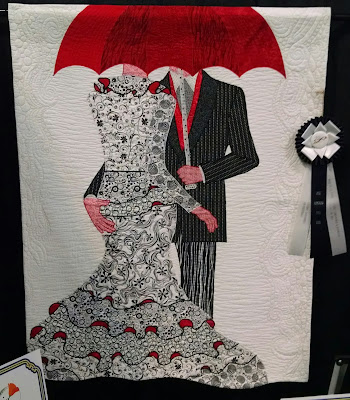 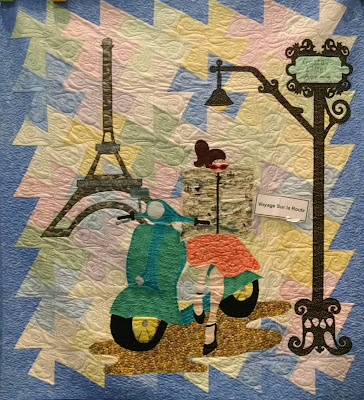 Check out her read frames and the daisy wheels. 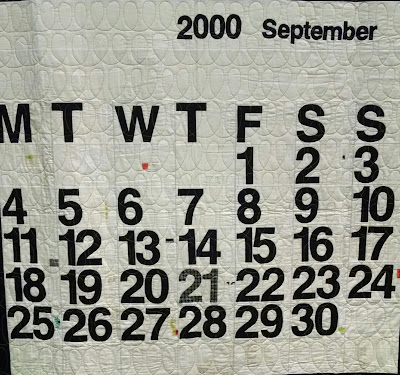 This calendar was a top quilt at the 2015  QuiltCon.

And dinner after the show: 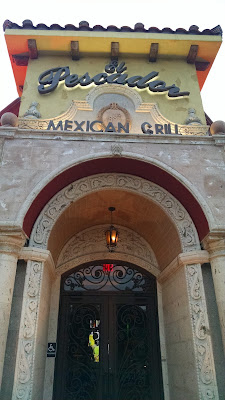 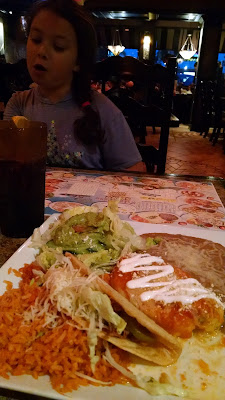 Today I want you to become aware that you already possess
all the inner wisdom, strength and creativity needed to make
your dreams come true.


For more than twenty years, I have traveled the Simple
Abundance journey.  I never tire of the journey
because each year I discover nuggets of truth. Maybe as
I get older, I am more accepting of the reality before me.
Before Sarah Ban Breathnach
and I traveled together with Simple Abundance,
we shared another journey with a book she penned:
Mrs. Sharp's Traditions:
Reviving Victorian Family Celebrations of Comfort and Joy.


In the early 90s, I was a stay-at-home mom raising
two little boys.  My husband, at the time, traveled extensively
for work.  The isolation I felt was related to his travel was really
related to an emotional ocean between us.  I walked on eggs shells
because I felt my emotional need was too great. My desire for intimacy
in the marriage relationship and a creative outlet was suffocating.

My family and close friends were far away. Southern California
culture was foreign. People from all over the world work and live
in Southern California but their stay is temporary.  I accept the
superficial nature, even admire the autonomy, I rarely run
into anyone I know, but it taken 30 years.
Their roots, like mine,  for the most part, aren't here.

There were other stay-at-home mothers in my neighborhood
but they were older and more sophisticated. They weren't interested in
the domestic arts or gardening.  For the most part, they had housekeepers,
nannies, and gardeners. This was a desolate time for me.


I was a homemaker in my mid-20s, I didn't "do lunch"
or play golf. What I wanted to do was play with my boys,
plant a garden, make mud pie messes, decorate and bake cookies
with my children, visit used book and furniture stores. Mostly
I wanted to create but I didn't know it.  My badges of honor
were an accidental green food coloring stain on the kitchen
wood floor and a pantry where I sponge painted, stenciled
teapots, and added the words...Happiness is in the journey.
They were private attempts of quietly comforting my authentic self.

From 1990 - mid 1995, I tried to satisfy the desires
of my soul by attending creative classes at every
venue I could find.  There was sewing, embriodery,
rug hooking, jewelry making, cooking, canning,
tole painting, and quilting. But just as I was making
like minded friends, my days of watching Oprah
and putting the roast in the oven at 3:00 pm were numbered.
In May of 1995, as the result of the economic downturn,
I returned to work out of necessity.  This was the same
year my boss gave me Susan Branch's Christmas from
the Heart of the Home.

But it wasn't until 2007, while on maternity leave with
my fourth and last child, that I discovered world of
blogs of creative community filled with like minded
women.  Although much younger than me,
these women had desires similar to those I
had so many years before and they
were thriving in creative lives.

Yes, everything you need is already in you.
It was there all along.

Live a balanced life-learn
some and think some and draw and
paint and sing and dance and play
and work everyday some.


In between, the painting of flowers from nails,
I have been quietly considering words for
my One Little Word 2016 project
hosted by Ali Edwards.

For 2015, my word was seed. The seeds,
explored in my thoughts were planted
throughout last year. It's a process, I will
not abandon.

Part of my recuperation process has been
to clear out clutter and purge. I cleared
out dozens of magazines and sorted through
books, ripping out my favorite pages
and collecting pages in categorized binders.

The Feb-March 2010 issue of MaryJanesFarm
had a snippet about praise. "As you open your
eyes to the work of talented women around you,
allow yourself to experience awe without envy."
Acknowledge and praise the work of creatives.

My 2016 word will be praise but I will
expand my understanding to all creatives
and to my biblical devotional learning, too.

I want to create and to praise the efforts
of others.

To start: Painting of a Garden 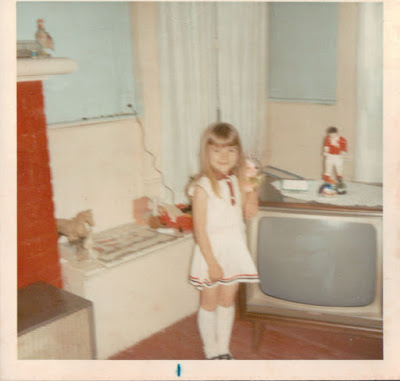 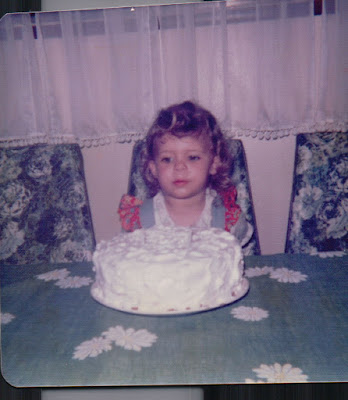 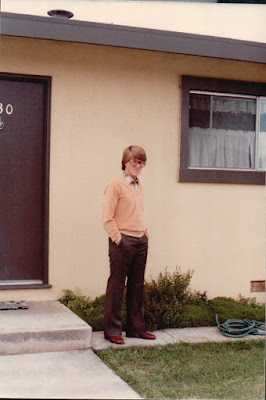