Of late, Mr.  Lee and I have
been visiting our local library.
The Get Along Gang are BIG fans.

With this visit, Design*Sponge at Home by Grace Donney
came home to Pumpkin Cottage.
A charming book, highly
recommended for its idea packed photographs.

Right off, a bonus, here's just a taste of the inspired forward:

I see Grace as a kindred spirit.
When I quit my office
job in 1993, (okay, full disclosure: I got fired from
a string of jobs and was unemployable), I
started making pottery and just hoped that
if I stayed true to my creative vision
of groovy and optimistic design,
I would succeed.  I had no idea what the hell
I was doing, and it was really hard and isolating. 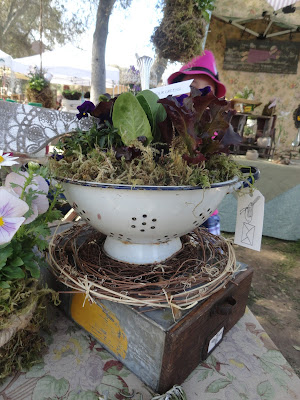 Do you some times assume design celebrities
are over night sensations.  Mr. Adler has
definitely made it and yet, he shares
his feelings of fear.  More importantly,
he shares his failures in the mainstream.
His focused uncompromising moxie
sustained him through the
difficult float period.

The period any entrepreneur,
without a trust fund, skids
on thin ice, goes hungry and
fills with self doubt.


Pottery, the art within him, called him
and surrounded him until he followed
the call.  I am a late bloomer, a very
late bloomer.

Listen, is your purpose calling?