Some where in Randy Pausch's The Last Lecture he says something like it matters more if you know your parents loved you than if they are alive.  For me this is true.  My father passed when I was 24 but we had lost him years before to Alzheimer's.   In the years since his passing I have never once wondered if he loved me or if I mattered.  I was and am confident in my knowledge that I was deeply loved.  My father never raised his hand or voice to me and this led me to the crazy idea that I should never allow any other man to do either and so it has been.  His loving influence was powerful and guaranteed a life of not settling in relationships or anything else.

My father's dad died when he was only seven and as the oldest of three boys it must have been very difficult.  My grandmother, Ursula, was only 27 at the time.  She never remarried and worked as a teacher to support her three little boys.  It was 1927, just let that sink in for a bit.  Think about what it must have been like.  During the school year, grandmother was only home during the weekends because she had to work on a different island during the week. My great-grandmother and great-grandfather raised the three boys.  My father only ever spoke of his great-grandmother. I regret not asking him about his recollections.   From my mother, I learned that he adored his grandmother and was brokenhearted when she passed.

He did reminiscence about her johnny cakes.  A recipe she may have learned while living in New Bedford, Massachusetts where my Greats lived and my grandmother was born in December of 1900.  My father wasn't openly demonstrative and I am sure he wasn't coddled growing up but I always knew he loved me. My father loved chocolate and would eat all the things I would bake for him especially chocolate chip cookies and German chocolate cake.  He communicated with animals in a very rare and mystic way.  The love of animals was inherited by all his children.  We were allowed keep a variety of creatures.

Here he is looking quite dapper in his official Portuguese Army photo in his 20s  long before he married my mother in 1946.  My father and mother in their passport photos in 1976.  He is 56 and mother is 47.  In his green card photo he is 49.  Father had a gorgeous head of hair until his passing at the age of 68. 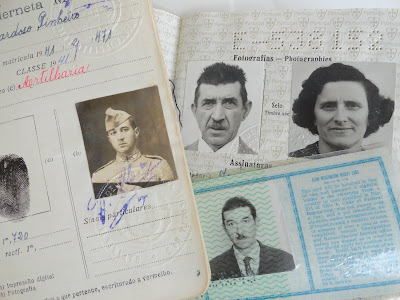 My father's influence finally led me to a man who is not only a wonderful husband and best friend but the most amazing Daddy.  Happy Father's Day to all the wonderful men that have positively influenced their children.
Posted by Genie at 10:31 AM